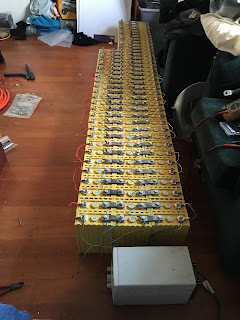 On the left is both the original bateries with the new ones being charged to 3.6 volts each

and I know its not 3.4 volts that I said in my last post but the originals where 3.5 so I thought that 3.6 would be ok and all i needed to do is turn on the heater(bottom left image) to use up the 20 extra volts (100 x 3.6 =360 -20=340) speaking of witch the heater is 3000 watts at 230volts but I can't waste energy stepping down the battery voltage so the heater does not burn out so I put them in series so they now become less than 3000 watts at 460 volts once I got them running the meter showed that they where about 2000 watts thats enough to warm the cab but not to much if it gets to cold it will take the chill off the air but around here we only get to -4c not like in the usa of -30c 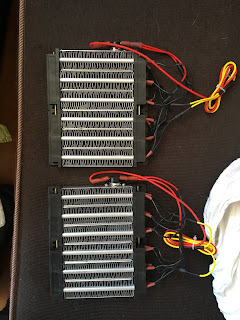